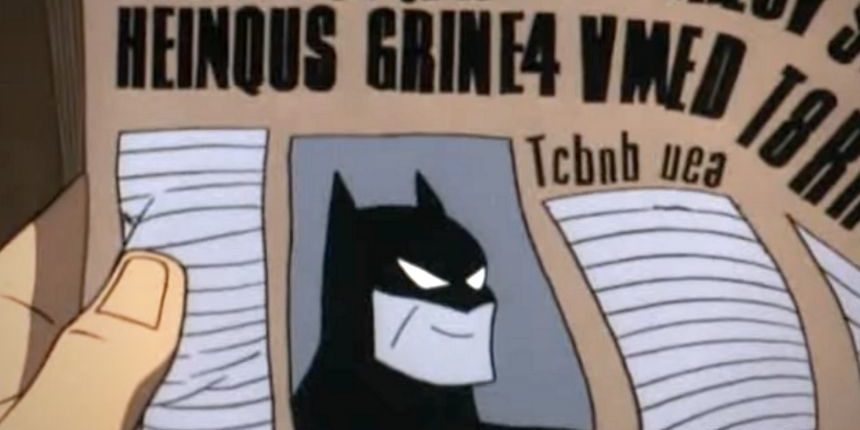 Batman: The Animated Series was a popular American cartoon in the early 90s. In episode 26, ‘Perchance to Dream’, Batman’s alter ego Bruce Wayne notices that something is wrong: he can’t read. The words in his newspaper become a mash of letters. All of his books are suddenly unintelligible. This leads the master detective to a conclusion: he must be dreaming.

But there’s two mistakes made in this scene, that come from old assumptions about dreams: that you can’t read in dreams, and that dreaming comes from the brain’s right hemisphere.
These two parts of ‘common knowledge’ are false and debunked long ago, but I keep hearing them floating around. So here is a blog to share with you what the latest scientific insight tell us.

Can you read in dreams? The series’ creators obviously didn’t think so. But they were mistaken. Though most people have difficulty performing rational tasks like reading in their dreams, some people can definitely dream intelligible text.

In the Youtube clip comments several viewers question Bruce’s conclusion, as a lot of them have actually read in their dreams. In my work as a dream expert, I talk to many journalists, whose job is to work with text every day. They often mention that they have no trouble reading text in dreams. And some of my clients have mentioned specific text that appeared in their dreams, usually one meaningful word that they could see as clear as day.

Bruce immediately suspected that he was dreaming when he couldn’t read his newspaper. He knows that reading is a function of the right half of the brain, while dreaming comes from the left. It must therefore be impossible to read something in a dream, he thinks.

But this is the second big misunderstanding: dreams do not originate left or right in the brain. While dreaming we are capable of using all of our brain, and often we do use almost all of it.

You can hardly blame the writers for this error. After the first brain surgeries in the sixties and seventies a flood of theories emerged about a task division between left and right brain hemispheres. It lead to a popularisation that since then has proved to be completely false, but somehow lingered on in common knowlegde.

The last 20 years a silent revolution has been taking place when it comes to brain research. New brain imagery techniques have put old ideas of ‘how it works in the brain’ upside down. We now know for example that our brain will start working the minute we do nothing, and that most of our thinking happens without us noticing.

Our ideas about the process of dreaming have altered significantly, as well. Since the brain is hard at work while we are sleeping, some scientists are refering to dreaming as ‘sleep mentation’: thinking in your sleep. We’ve seen research that shows that we can practice motor skills while dreaming, or solve problems in our sleep, and wake up with a good idea. And reading in dreams may not be a daily occurrence for everyone, but it is definitely possible.