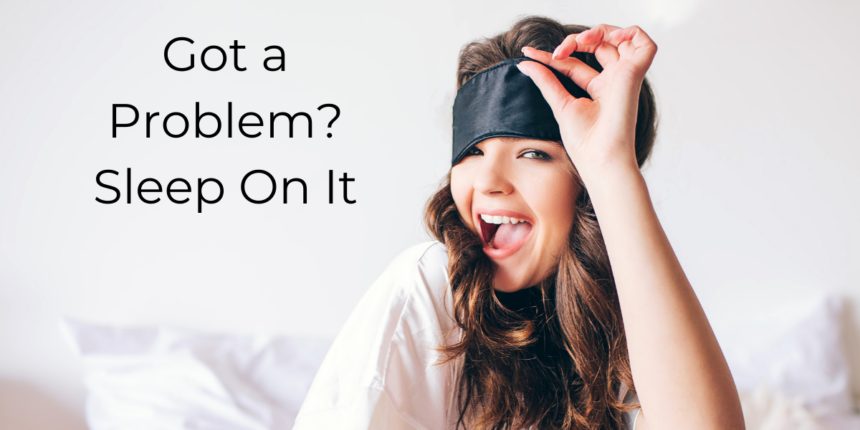 When thinking harder doesn’t solve a problem, your dreaming mind may dig deep and find a good idea.

A man named Harry* is lying in bed in a mountain cabin, and he is in pain. A logical, 44-year-old computer engineer, he is not the type to panic. But his hiking vacation has barely begun and already his achilles tendons are throbbing.

“Then I dreamt that my feet were wheels, rolling round and round. Waking up, the idea came to improve my foot strike and do a proper heel to toe roll. I tried it the next day and it worked. I still think of that from time to time when I am on a hike.”

Harry didn’t know it, but he was thinking in his sleep. While his body rested, his mind brainstormed on the problem at hand: the pain in his feet. He hadn’t found the solution by worrying about it during day, but his dreaming mind dug deep and found a good idea.

A fluke? Hardly. Most of us know that sleep is essential for processing memories. But during sleep we also begin making new connections with the information we collect.   “Sleep seems to stimulate your mind to make non-obvious connections,” says Matthew Walker, Berkeley University sleep scientist and author of  Why We Sleep: The New Science of Sleep and Dreams. “This is the basis of creativity – connecting ideas, events and memories that wouldn’t normally fit together.”

Most people believe that to solve a problem we have to think harder, focus more. But that’s not always the case. Sometimes, it’s about letting go. Have you ever tried to think of a name really hard, only to have it pop into your mind in the shower or while falling asleep? Those moments of letting go are when our brains allow what’s called the “the default mode network” to do its thing: make new, unexpected connections.

Not surprisingly, this creative network is also very active during REM sleep, the stage of sleep when our most vivid dreams occur. Which is why we often wake up with a new insight, or a good idea.

Even rats dream up solutions to problems, found researcher Matthew A. Wilson, PhD, in his laboratory at MIT. He let his rats walk through mazes during the day, with their brains wired to scanners. When they fell asleep, he saw them dream of mazes, and come up with new routes to find an exit.
Deirdre Barrett, PhD, professor of psychology at Harvard Medical School, devoted her life to researching dreams and creativity. She defines dreaming as the mind “thinking in a different biochemical mode.”

Thinking, because a dreaming brain and a waking brain are remarkably similar. During REM sleep, our brains are nearly as active as in waking life. The same stresses and concerns we have in waking life, such as stress of a pandemic, tend to show up in dreams, though not always literally. If, for example, we see a face or dream of a face, our facial recognition centers light up just the same.

But they are different in the way that in REM sleep, our brain is making new neural pathways, not hindered by an internal censor. Our neurotransmitters shift to make new and unexpected connections, while logic takes a backseat. We automatically become divergent and out-of-the-box thinkers. Anything can happen in a dream.

When we’re stuck with a nagging problem and not getting anywhere, when we need to see an issue from a different perspective, that’s when sleeping can give novel solutions.

Here are 3 three things Harry did right, and how you can try this at home.

1. Prime your brain: Think about a problem before falling asleep

Never go to sleep without a request to your subconscious

We’ve all probably had the experience of waking up with a new insight or a good idea. Science says, that’s not just because we wake up with rested neurons, it’s also because our brains stay active all through the night. We think and brainstorm in our sleep,
even if we don’t remember.

Psychology professor Barrett ran a study where she asked students to intentionally sleep on a problem for a week and try to dream up a solution. Even after the first try, half of them got a relevant dream, and a third found a solution.  One key to success that Barrett identified is to care about the problem you’re trying to solve. A dreaming brain is emotionally driven, so it’s easier to dream about your love life or pain in your feet, than about math problems. And that was exactly what Harry did – he worried. And fell asleep.

Try this at home:
Before going to bed, think about a pressing challenge you’re having. If you like, write it down as an open question that deserves a surprising answer. While you’re asleep, your brain will work on the problem.

Sleep is the only source of invention

Brainstorming takes time, even if you’re asleep while doing it. Harry was on vacation so there was no alarm clock. He could let his brain do its thing. And that turns out to be important.

If we want to tap into our sleeping resources, an alarm clock might be the enemy. That’s because idea generation happens in REM sleep, and the bulk of it takes place in the morning hours, right before you wake up. Cut your sleep off with an alarm clock, and you might end up losing some of that brainstorm.

REM sleep is a perfect environment for our brain to explore options. Our sleeping brain is hardwired to come up with original solutions – but it needs time to do the work.

Try this at home:
Instead of jumping out of bed, take a minute or two to remember your dreams. No dreams? No worries! Your brain works for you regardless. Check how you feel: are there any thoughts floating around? Catch your subconscious intelligence and write down whatever comes up.

A problem difficult at night is resolved in the morning after the committee of sleep has worked on it.

Waking up, Harry didn’t dismiss his dream. He started exploring. Sure, the dream was physically impossible, but to Harry that didn’t make it nonsense. He inspected his dream (What do wheels do? They roll) and saw what it made him think of (hiking 101: roll your feet).

Harry used his dream as a starting point to see his problem from a new angle. As a clever visualization of “rolling your feet.” And when he was happy with the insight, he tried it out in waking life.

Thinking while we rest often leads to connections we previously missed. It’s not like Harry didn’t know how to walk, or that he wasn’t doing it properly. He just didn’t connect the dots. Sometimes it’s important to let go of focus for a bit, to let our mind be open for new insight. Making new connections between existing ideas is what our sleeping brains are hardwired for.

Try this at home:
Take a moment to explore whatever you wrote down in the morning. Mull it over: What does it make you think of? Any ideas in there that are worth trying out during the day?

Dreaming is neither consistently wise, nor consistently useless. The dream’s power lies in the fact that it’s so different a mode of thought – that it supplements and enriches what we’ve already done while awake.

Written by Nicoline Douwes Isema
Edited by Janet Ungless
Image by Anton Estrada via Canva
This blog is also published on crescent.co